4 Unique Characteristics of the SMB Space

When selling technology to small and medium-sized businesses (SMBs), you have to put yourself in the position of the entrepreneur or small business owner. While doing so, it’s crucial to remember that SMB sales are different from enterprise sales not just because they have smaller budgets, but because their needs and approach to technology are very different.

Whereas enterprise sales tend to be larger contracts, there are many more potential SMB sales. There are 30.7 million small businesses in the United States, and they are hungry for the latest technology.

Eleven percent of SMBs spend more than $1.2 million annually on cloud technology. Taken as a group, SMBs have considerable spending power and represent a large pool of potential revenue. The challenge for most technology providers is finding the best approach to sell to SMBs.

There are a number of characteristics that make SMB sales different from enterprise sales, but four trends seem to be common to all SMBs, and when you understand them, it will guide your SMB sales effort.

With enterprise sales, you tend to have a wide range of participants in the decision-making process. The conventional approach is to identify the key stakeholders and sell to them first, gaining their support for your solution so they can advocate for you. What follows is a series of meetings, negotiations, trials, and other steps until you close the deal.

When you are dealing with an SMB you have a much smaller pool of decision makers. For 74 percent of SMBs, the decision maker is the business owner, so you are really selling only to one person.

A business owner or SMB executive is very busy, so they aren’t interested in dealing with sales calls, even if it’s for a product they need. They would rather do their own research in their own time and narrow the field before taking the next steps. In fact, research shows that SMB buyers are already 70 percent of the way through their journey before they contact a supplier.

It is often the case that the SMB buyer has identified a problem that needs to be solved, but has not found the right solution. When they start conducting research, they are often looking for potential solutions rather than specific products. That’s why providing information to educate the SMB buyer is a critical part of SMB sales.

With enterprise sales, you often are working with IT professionals who have a very clear idea of what they are purchasing. With SMB sales, the seller has to assume more of the role of a consultant, advising the prospect to help them solve their problem.

To turn SMBs into loyal customers, you have to show them how to solve their problem and prove that your solution will help them increase revenue.

Enterprise buyers tend to have larger budgets and shorter-term goals, so when they make a technology buying decision, they don’t feel the same level of risk as SMBs.

Any buying decision for an SMB is critical. Most SMBs are bootstrapping their operations and can’t afford to make the wrong technology choice. That’s why SMB owners are so careful with their research. It could take some time until they are comfortable making a buying decision, so the best way to keep them interested is by continuing to offer valuable information until they are ready to commit.

To keep SMB prospects warm requires an automated process. It’s not cost-effective for sales reps to nurture SMB prospects until they are ready to buy. When you consider the lifetime value (LTV) of the SMB customer, the return in a high-touch sales initiative is much too low. Automating the process and continuing to nurture the lead via email and other strategies is much more cost-effective.

4. SMBs Have Less to Spend

When the SMB buyer steps forward and is ready to commit, you may find that their budget is woefully small. There are a couple of ways to deal with small budgets:

First, be sure you qualify the buyer. Some SMBs are in the startup phase and may want to buy but they haven’t got the funding, or they can’t support the contract. Before you invest time and energy in trying to close a deal, be sure that they are qualified. Lead scoring is a good way to distinguish the interested buyers from the tire kickers.

Second, offer terms that make the deal more palatable. More companies are adopting the SaaS software pricing model, offering subscription contracts rather than one-time deals. Subscriptions yield recurring revenue, which makes profits more predictable, and they are easier for SMBs to work into their operating budget. Subscriptions also tend to increase the LTV of SMB customers.

Get Started with SMB Sales

These are just four of the characteristics that differentiate SMB sales from enterprise sales. If you can appreciate SMB buyer restrictions and how they think, then you will find that it’s easier to increase SMB sales.

Receive blog updates in your inbox 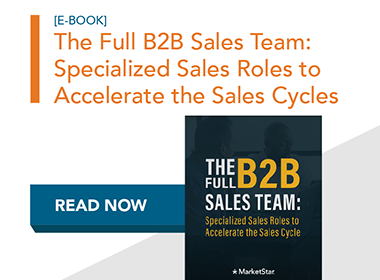